I was sitting at a table amongst women whose eyes were locked on their sewing projects. Since the program was new, I had limited instructions on what exactly I was supposed to do, and how to do it. I had brought writing booklets and pens in case teaching some French, their second language, would be part of the class. However, I soon realized that none of them spoke a word of French, nor English. In fact, they barely spoke at all. They were quietly intrigued by my blank sheets and pens but as soon as I would reach to them they would go back straight to their projects.

Many women in Morocco suffer from poverty, illiteracy and unemployment. The program was conceived to empower women by improving literacy levels, assisting with professional development and providing support to females suffering from domestic violence. The idea was to help them with languages, give them the tools to enter the work environment and build their confidence.

Jemilah was in charge of the sewing activity in the afternoon. She had a contagious smile, her beautiful face delicately wrapped in a pink hijab. Her job was to hold a free class of a few hours each day, and where any women could feel comfortable to come in and sit amongst other females. There wasn’t any formal teaching, but rather a gathering of females sharing the same learning activity while having the support of others.  At 28 years old, Jemilah was an educator at the Dar Attilaba, loving wife and caring mother. She always carried a portfolio of different sewing projects, most of them leading to the creation of a djellaba.

Although Jemilah’s French was limited to only a few words, I managed to have a bit of understanding with her. Since we needed to bring our own material, she took us on a walk on our second day to get what we needed to participate in the class. We followed her through the mazed alleys of the medina in search of threads and fabric. 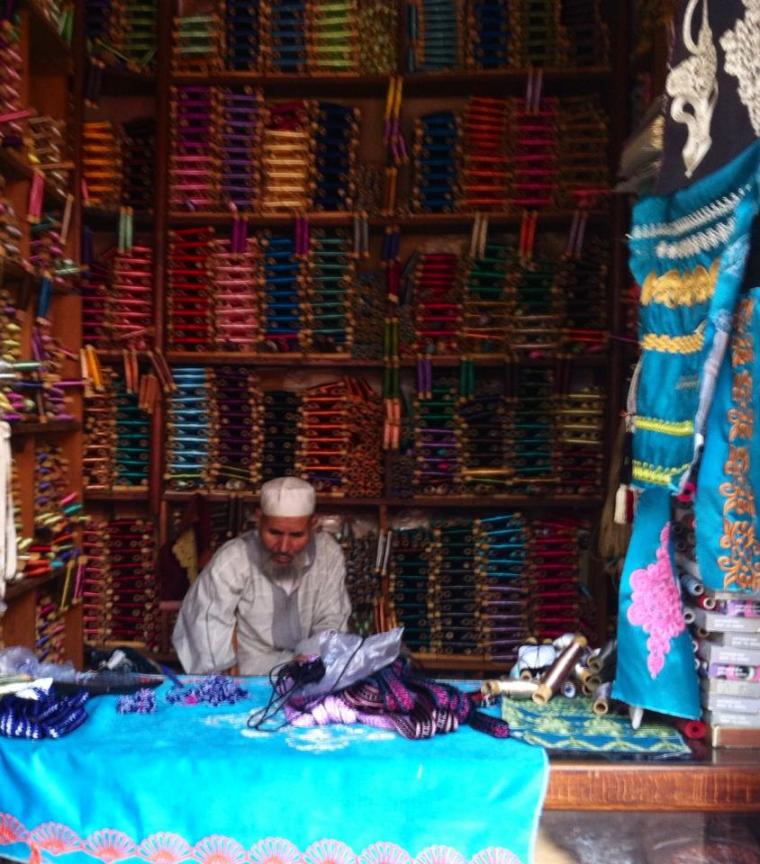 We spent afternoons with Jemilah and her students, sitting at the table learning the art of Moroccan sewing and being taught the basics of Arabics. At this point, I was confused and powerless, as I felt I received more that I actually gave. My pens and blank booklets stayed on the table, however I decided not to touch them. I realized that at this point, I couldn’t teach any language. Perhaps the idea was simply to genuily be interested and engaged in their lives, the best we could. My goal became to do the best I could each day to have their eyes lift from their sewing project and acknowledge our presence. Some days would be more silent, other days we would laugh at how incredibly awkward it was to understand each other. And that became the reward. In a month, we barely exchanged any words, but communicated with expressions, signs, smiles and laughs. 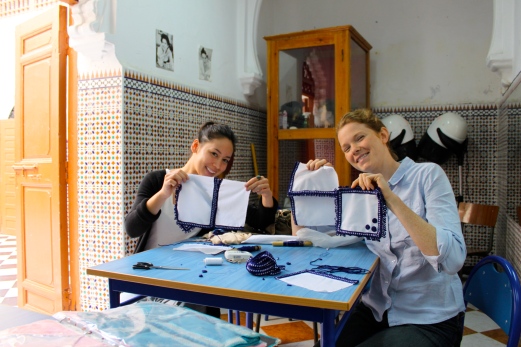 It took a while before adjusting to this very new situation, but after a few weeks, it almost felt like family.