On Friday, an estimated audience of 3 billion people worldwide watched the Opening Ceremony of the Sochi 2014 Winter Olympic Games. The ceremony was extravagant, breathtaking and colourful, preceded by the march of athletes into the Fisht Olympic Stadium, fired with enthusiasm, excitement and proud smiles.

The Sochi Games haven’t got a positive press lately. Of course it started with bad Internet humor pretending the ban of China in figure skating after an athlete tested positive for homosexuality. Then this article about the murder of the technical specialist responsible for the 5th Olympic ring change fail at the Opening Ceremony. However, the capture of 2 orcas and the killing of stray dogs were real, agitating people from all around the globe, giving a negative start to the Games. And let’s not forget the criticism of human right violation concerning  the less-than-satisfactory conditions for athletes, journalists and visitors. No wonder why people are questioning those 51 billions spent for the Games.

But my point here isn’t to criticize the Sochi Olympic Commitee. I’m sure they’ll be a ton of other people to do so. As much as we can hate the organization and be against the glitches of this year’s Games, we should not forget that the Olympics are for the athletes: the ones that train hard everyday, year after year, in the goal of realizing a lifelong dream. The ones that inspire the world by sharing their passion for the sport and representing their country with a unique sense of patriotism, accomplishment and pride.

“Never underestimate the power of dreams and the influence of the human spirit. We are all the same in this notion: The potential for greatness lives within each of us.” – Wilma Rudolph, U.S. gold medalist in track and field

When we hosted the Whistler/Vancouver 2010 Winter Olympic Games, most of the residents were a a bit skeptic about hosting the international event. The arrival of the Games created a lot of change in our small village: a new highway, new hotels, a forest traded for a stage. We surely had our share of feelings then. A lot of residents flee for a couple of weeks, some others feared the crazy work schedule we were about to undertake. But when we opened our doors to the world, everything changed.

The rush of emotions experienced during the Games is indescribable. To be in the middle of a crowd of people from different nationalities cheering and hugging, congratulating each other without even speaking the same language, I felt like for once the world was happily united. As much the Olympics are a competition, it felt more like an euphoric celebration of humanity. And I’m glad I had the chance to be part of it.

“Thank you, Canada. For being such good hosts. For your unfailing courtesy… For reminding some of us we used to be a more civilized society. Mostly, for welcoming the world with such ease and making lasting friends with all of us.” – Brian Williams, NBC News

I remember when Canadian skeleton athlete Jon Montgomery won his gold medal. He strolled down the village capping the Canadian flag with a honored smile. When he passed in front of our restaurant, the patio cheered, one man handing him a pitcher of beer that he proudly enjoyed under the snowflakes falling. And when Crosby scored the goal that made win the men Canadian hockey team against the United States, the crowd went hysterical. The ground was shaking, the honks orchestrating, the passionate patriots became ecstatic. History was made, on home soil. Those two scenes are just a few amongst others, all so powerful, palpable and exceptional. 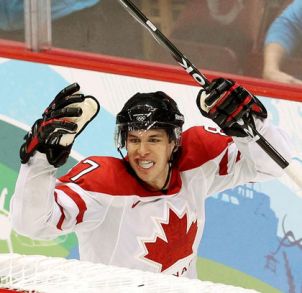 “This quiet city with such beautiful scenery made all of Canada proud … In a nightly transformation, as many as 150,000 people flooded the closed-off downtown streets to savor the Olympic experience. Mostly mild instead of wild, the crowds whooped, hollered, danced and shouted ‘Go Canada Go!’ well into the morning.” – The Houston Chronicle

The Olympic Games turned out to be one of the richest experience in my life. From the athletes celebrating their dreams achieved, to the concerts and parties, medals circulating through a crowd of different ethnicities. The air was electric, the crowd vitalizing and moments memorizing.

Despite all the concerns and controversies affecting the Sochi 2014 Winter Olympic Games, let’s put our energy for a moment towards all the dedicated, talented and diligent people involved. Let’s embrace the Games and cheer for accomplished and uplifting individuals. They might inspire you to believe, and follow your dreams.

Good luck to all athletes, and let the Games begin!

***I do not own these photographs.